Here at Worktop Express® we’re not only keen on worktops – we also take great pride in supporting local sporting heroes. We back a range of teams and individuals, the full list of which can be found over on our sponsorship page.

As winter creeps up on us, we thought it was a time for a recap on the happenings of some of our sponsees. 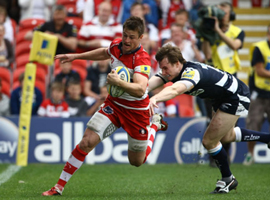 After a successful start to the year with a call-up to the International squad, and 5 tries during the 2013-2014 season, Trinder was unfortunately side-lined with a painful shoulder injury at the end of September, which required immediate surgery.

Despite this, Trinder has been keeping active, and supporting the club by other means. He features on the ‘Rugby for Heroes’ 2015 calendar, commemorating 100 years since WW1, the proceeds of which will go towards a number of armed forces charities. It’s available from the GRFC website for just £10.

After 7 games played, Gloucester sit 8th in the AVIVA Premiership table, and whilst many of our staff have been there to support the club in our box above the Mira Showers Stand, we hope to see the team bringing home a few more wins before the year is out.

The Kingsholm Stadium will also play host to a variety of games during the 2015 Rugby World Cup, and on November 15th saw the first friendly international pre-tournament game featuring Tonga vs USA. Tonga romped to victory with a score of 40-12, showing that even though the country may not be a super-power, the Pacific islanders are the ones to look out for in next year’s World Cup. 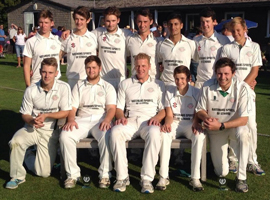 It’s been a bumper year for Frocester Cricket Club, and now that the season is well and truly over, they’re owed a huge round of applause: FCC have been crowned Western Premier League champions!

After a thrilling season finale against the city of Bath, Frocester’s team finished the job in style, then followed it up the week after with a win over Gloucester AIW to take the Gloucestershire County Cup! That’s a highly deserved double for Frocester – we can’t wait to see what 2015 holds for them.

We were there on hand at Deacon’s first race of the season to cheer him on, and despite some early hiccups, his season has seen some great progress: Deacon finished 14th out of 56 in the popular Men’s class 5 after a finale at Javelin Park, between Gloucester and Stroud.

We hope to see some great success from Stuart Deacon next year, once he perfects his new 2014 car’s weight distribution. If you missed it, watch Deacon in action over on the Worktop Express® YouTube channel.

If you’re a local sporting team or individual and are looking for sponsorship, then please do get in touch. We’d love to hear from those looking for mutually beneficial opportunities!

Alternatively, if you want to share the love with our local sporting individuals, pop along to our Facebook page, or mention us in a message on Twitter.