Tree News: England Home to More Ancient Oak Trees Than All of Europe

Oak trees are a symbol of strength, wisdom and endurance, and are by far the most popular choice for those looking for long-lasting solid wood worktops.

Whilst the majority of timber used to create our oak worktops is from the most sustainable sources in Eastern Europe, this beautiful species still dominates the English countryside.

In recent tree news, it was revealed in a nationwide survey of ancient oak trees that England has more of these majestic giants than the rest of Europe put together. The survey was undertaken over the course of four years, and discovered 1,200 previously unknown but still surviving oaks that would have been standing as far back as the Tudor and medieval period.

This brings the grand total of recognised ancient oaks in England to 3,400, with some 85 percent as much as 600 years old, whilst 12 percent are up to 800 years old, and 3.4 percent (117 individual trees) date back as far as 1,000 years. By contrast, the entire of continental Europe is estimated to contain just 2,000 ancient oak trees, the vast majority of which can be found in Sweden. 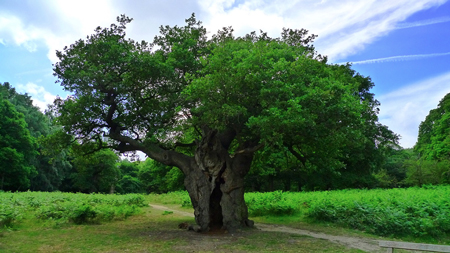 England’s oldest oaks can be found in Merton (Cheshire), Lydham Manor (Shropshire) and Bowthorpe (Lincolnshire). Each of these are approximately 13 metres in circumference and between 900 and 1,000 years old.

As well as increasing England’s inventory of ancient oaks by more than 50 percent, this new research from the Woodland Trust helps to reveal why the oak plays such an important part in English culture compared to many other countries in continental Europe.

The oak tree has strong representation in many aspects of English history, and is one of the most popular symbols of royalty, with – for instance – more than 500 pubs called the Royal Oak. You’ll also find oak trees, acorns and oak leaves on countless English aristocratic coats of arms.

If you want to know more about the history, sourcing and properties of oak, we recommend reading our ‘All About Oak Worktops’ nutshell information guide.

Got a beautiful ancient oak tree in your local area? We’d love to see your photos, so don’t hesitate to share them with us on Facebook, or tag us on Instagram.

Filed under: General by Worktop Express Admin
No Comments »