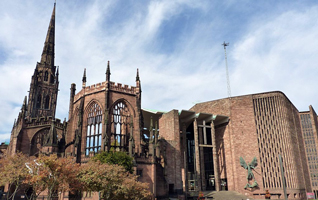 The 10th largest city in England, Coventry is situated 24 miles South-East of Birmingham. Appointed the capital of England more than once in the 15th century, the city now harbours a population of over 330,000 people, and is rich with historic architecture.

With a number of landmarks throughout the city, Coventry's skyline is well-known for its three distinctive spires. With the largest number of visitors each year, St Michael's Cathedral is the most popular tourist attraction of the three, and also featured in the 2009 film, 'Nativity!'. Built in the 14th century, vast sections of the building were destroyed by bombing during World War II - only the outer walls and spire survived. At 92 metres, the St Michael's Cathedral spire is said to be the third tallest in England.

Alongside this remarkable spire, Coventry is home to the famous statue of Lady Godiva. As legend has it, Lady Godiva rode nude on horseback through the streets of Coventry as a mark of rebellion against the taxes her husband (the Earl of Mercia) imposed upon his tenants. Interestingly, it is from this curious tale that the expression 'Peeping Tom' arose, whereby, in later versions of the legend, a man named Tom cast his gaze upon the Lady and was immediately struck down. Based on the city's illustrious former resident, Coventry now plays host to the annual Godiva Festival, a free annual music event held in War Memorial Park.

Located a short distance from our Smethwick showroom, customers in Coventry can easily discover a wide range of worktops on display at the Worktop Express just outside of Birmingham. We are very proud of the quality of our kitchen surfaces, but if you want to see them for yourself we invite you to order some of our worktop samples straight to your door, which come with free delivery!

Order your worktops by 12 noon for next day delivery to Coventry.