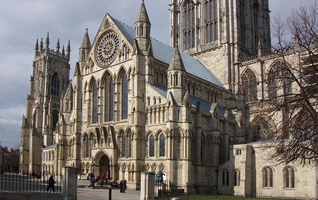 The historic city of York is encircled by more intact stone walls than anywhere else in the country. Originally constructed by the Romans in 71 A.D. as a form of military defence, the walls have been replaced in parts many times over the centuries. Fortified during the Danes occupation of the city in 867, an earth bank was added and the walls strengthened. Much of the wall that exists today was built during the 13th and 14th centuries, and it brings a great sense of heritage to the town.

Having taken 250 years to build, York Minster is the largest Gothic cathedral in Northern Europe and dominates the city's skyline. The impressive structure sports large panels of stunning stained glass, whilst the western window incorporates a heart-shaped design that is affectionately known as 'The Heart of Yorkshire'. York has been home to chocolatiers for many years, as the birthplace of Nestlé (formerly Rowntree) and Terry's (now owned by Kraft). The city is also noted as the most haunted place in Europe, with over 504 recorded hauntings according to the Ghost Research Foundation International. What's more, York is supposedly host to the 'Ghosts of the Greatest Longevity', with the famous Roman Legionnaires said to reside in Treasurer's House.

Whether or not you believe in ghosts, one thing you can count on is the impressively high quality of our worktops. As they say, seeing is believing, so why not order a worktop sample, with costs starting at just £5 for individuals or for packs. This price is inclusive of VAT and delivery charges, and can even be refunded against your worktops - on a one-for-one basis - when you decide to place an order with us. Please get in touch with our friendly sales team by telephoning 0345 22 22 644 or by emailing .

Order your worktops by 12 noon for next day delivery to York.