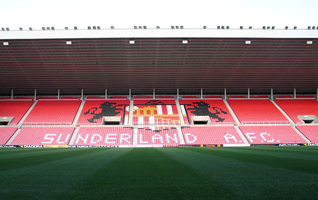 The city of Sunderland in Tyne and Wear was borne from three original settlements within the region, located around the mouth of the River Wear. Firstly, to the north of the river, Monkwearmouth was established in 674, in conjunction with the formation of the Wearmouth-Jarrow monastery. Opposite the monastery - on the south bank of the river - was Bishopswearmouth, established in 930. Finally, a small fishing village - by the name of Sunderland - perched right at the river's mouth, and was granted a charter in 1179. As the settlements grew and merged, Sunderland became a thriving port of trade for coal and salt, until eventually - by the 19th century - the fishing village absorbed the two other settlements entirely.

As heavy industries waned in the region in the 1900s, they were replaced with the manufacturing of electronics, chemicals, paper and motor vehicles. Amongst these flourishing businesses is the UK-based car plant for Japanese car manufacturers, Nissan, which has over 500 robots operating in the factory's body shop.

Sunderland is probably most famous for its football team and their home ground, the Stadium of Light, named both as a symbol of guiding light for the future and in tribute to the thousands of mine-workers of the city's industrial heritage, who toiled in near-darkness and emerged into the light at the end of the working day.

Residents of Sunderland can receive our worktop samples straight to their door with our speedy delivery service. The cost of our samples starts at just £5 each, and a member of our friendly sales team will be happy to discount the price of samples against your worktop order (on a one-for-one basis) when you make your purchase over the telephone. To do this, please call us on 0345 22 22 644. Alternatively, we can be reached by email at

Order your worktops by 12 noon for next day delivery to Sunderland.