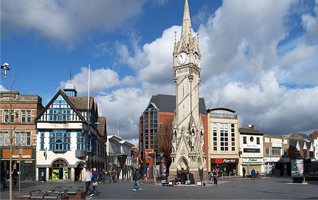 Leicester has a long history dating back at least 2,000 years, with the Romans being the first to turn what was then known as Corieltauvian into a more well-established settlement. Since the Industrial Revolution, and the arrival of the Grand Union Canal in the late 18th century that put Leicester firmly on the map as a highly-regarded town in central England. Since 1861 the population has increased from 68,000 to over 330,000 today, with over three quarters of a million living in and around the Leicester urban area.

The Midland city stands out as one of the cities in England that has retained many of its older buildings, fortunately not falling victim to the vicious aerial attacks of World War 2, at which time it was regarded as one of the richest cities in Europe by the League of Nations. This long and prominent history is still retained to this day, as Leicester is now home to Great Britain's National Space Centre, huge retail, commerce and engineering sectors, which give the area above-average employment.

The large population base and wealth have delivered a wealth of worktops to many Worktop Express® customers in Leicester. Our range includes a wide selection of high quality wooden worktops, including such favourites such as oak and beech, alongside more exotic timbers such as bamboo, wenge and black American walnut. Any timber used by us is carefully selected from well-managed, sustainable sources in Eastern Europe and Africa, and are manufactured into worktops in our advanced facilities in the UK. They are then sold unfinished, or can be fabricated to a customer's bespoke requirements in our Gloucester headquarters by our fabrication team.

We also have a carefully curated selection of laminate worktops in a range of designs - so we are sure to have something to suit every style and budget. Alternatively, our Earthstone work surfaces look and feel just like solid stone tops, offering a touch of luxury at a fraction of the cost.

Our on-site experts have access to a wealth of the latest equipment, including CNC machinery, specialist oiling and finishing systems, which allow us to produce quality worktops that meet even the highest of standards. Bespoke customisations are available on all of the worktops we offer.

The Worktop Express® in-house 2Man delivery team offers next-day delivery to many parts of the UK, including Leicester and the surrounding area. For the highest quality kitchen worktops in Leicester, Worktop Express® should be your first choice. With a nearby showroom in Birmingham, a speedy delivery service and a knowledgeable customer support team, buying great value worktops in Leicester is incredibly straightforward.

Order your worktops by 12 noon for next day delivery to Leicester.