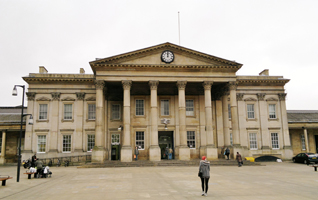 Nestled within the West Riding of Yorkshire, near the confluence of the River Colne and the River Holme, Huddersfield is a lively market town found within the northern metropolitan borough of Kirklees.

The birthplace of rugby league, the town is home to the Huddersfield Giants, one of the original twenty-two rugby clubs that formed the Northern Rugby Football Union in 1895. In addition to sport, Huddersfield is also known for being a hub of educational development, with the University of Huddersfield and three further education colleges all located within the town.

Not only a driving force for academia, Huddersfield is also filled with Victorian architecture and its railway station was described by Johns Betjeman as second only to St Pancras as 'the most splendid station façade in England'. Not only that, but the station has also been awarded the prestigious Europa Nostra prize for European architecture.

Our beautiful beech worktops are best-sellers in this part of the world. With a characterful grain pattern and pinkish hue, these popular solid wood worktops bring warmth to the very heart of the home. Alongside our beautiful solid wood kitchen surfaces, we also have a selection of laminate worktops available in a wide variety of different designs. Our Earthstone worktops provide a glamorous option for any home, recreating the look and feel of solid stone surfaces at a fraction of the cost.

Huddersfield is just an hour's drive from our showroom in Warrington, Cheshire, and is a similar distance to our Chesterfield location. If you aren't able to travel to one of our showrooms, then samples of any work surfaces from our wonderfully extensive range can be ordered online or over the telephone on 0345 22 22 644. Costs start at just £5 with free delivery - a small price that can be refunded against orders of full priced worktops.

Order your worktops by 12 noon for next day delivery to Huddersfield.