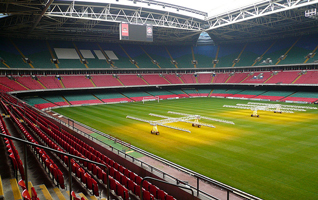 Before the 19th century, Cardiff was a relatively small town, growing into a city during the industrial revolution of the late 19th and early 20th century, when it was finally designated as a city in 1905. With the boom in Welsh coal production the port continued to grow, and is now Wales' largest transport hub, as well as home to many national sporting venues and the Welsh National Assembly.

Much of Cardiff's success came after the introduction of a twice-weekly boat service between the Welsh port and Bristol's bustling docks, which delivered greatly needed supplies to the burgeoning town.

These grass-root beginnings which saw Cardiff grow into the busy commercial and transport hub that it is today, is somewhat reminiscent of our own business. From humble beginnings, Worktop Express has grown to become the largest online retailer of solid wood worktops in the UK, and have built our own internal transport network to best serve the demands of our customers.

We can deliver worktops to Cardiff and the surrounding areas with our 2Man delivery service, which covers the majority of England, Scotland and Wales. Orders placed before 12 noon can be delivered next-day and our in-house team will provide a 2 hour timeslot and a 30 minute courtesy call before your worktops arrive.

Our collection of kitchen worktops are exceptional quality, and includes a variety of solid wood surfaces, laminate worktops and Earthstone kitchen tops, which means there's a selection to suit all budgets and kitchen designs, without having to compromise on quality.

Order your worktops by 12 noon for next day delivery to Cardiff.