Having chosen the right worktops to suit your new kitchen, deciding upon which kitchen taps might best suit your requirements will demand some careful consideration – there are a vast array of types on the market, and our collection includes some of the most popular styles. In this guide, we will go over the most common taps found in kitchens; we’ll give insight into some of the terminology; and we’ll also give tips on how to install taps easily next to your sink on a wooden worktop. 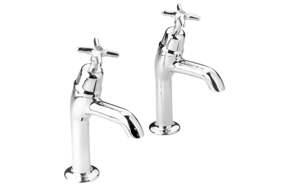 Pillar taps are commonly used in utility rooms, or in kitchens where getting the hot and cold water pressures to equalise is not possible. They come in both traditional and modern styles to suit a variety of kitchen themes. 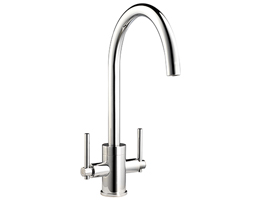 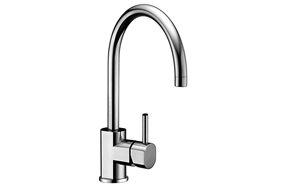 This type of single-lever tap has become very popular, as you can easily turn the water flow on or off and mix the hot and cold water together in one simple action. These taps are usually designed with modern kitchens in mind. 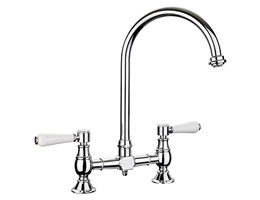 A bridge mixer tap is similar to the mono bloc tap, but accommodates sinks or worktops with two separate holes.  Whilst you may require this for practical reasons, it can also be chosen for aesthetic preferences, too. If a bridge tap suits your requirements, take a look at the following taps in our range: 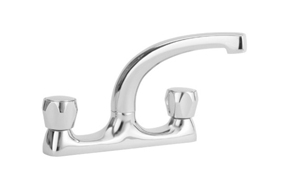 This type of tap has been common in British kitchens since the 1970s, and, though less fashionable in modern kitchens, can still be found. They still work well on high and low pressure systems, but will require a hole drilled in the surface for each water feed. You can read more about deck mounted taps in a ‘Question of the Week‘ posted in August 2016. 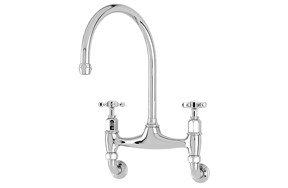 As a stylish alternative to a standard mixer tap, a wall-mounted mixer can be ideal if you have a narrower worktop, or a convenient wall placed behind your sink area. These are available in either modern or traditional variants, so could suit any kitchen setting. 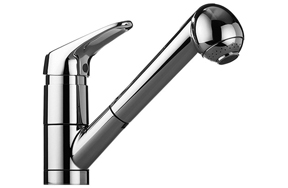 This unique type of mixer tap has become popular in recent years, as the tap head has a retractable extension which allows you to use as a spray to clean dinnerware and food more easily. Requires high water pressure, but is otherwise perfect for an up-to-date kitchen with other mod cons. Pull-out mixers are also available as a separate tap fixture. 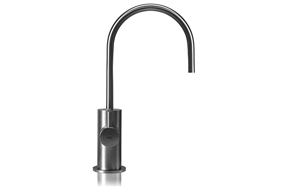 This type of tap has become especially popular for kitchens in hard water areas. The tap incorporates a filter that removes fine particulates and chemicals to provide much more pleasant drinking water. Often fitted as a secondary tap alongside a standard mixer. 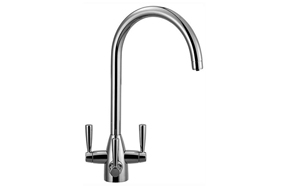 Sometimes known as a ‘Triflow’ mixer tap, three-way mixers include normal hot and cold water feeds, but also incorporate a filtered cold water feed. This is a much tidier design than having separate taps and is available in both modern and traditional designs. 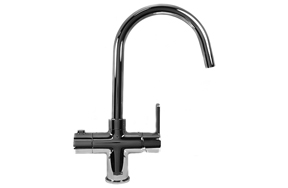 If waiting for the kettle to boil seems like wasted time, then a boiling water tap might be an ideal addition for your new kitchen. Most require a holding tank below the sink and a reasonable water pressure, but provide 100˚c water on demand that’s perfect for hot drinks, and also speeds up cooking and washing up. Most boiling water taps currently come in a modern design.
Did you know we also sell a large range of kitchen sinks? Our collection includes a variety of ceramic and stainless steel options; head to our kitchen sinks page to see our full range. 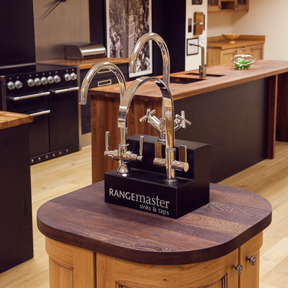 Before you install your new kitchen tap, don’t forget to turn any isolation valves, and / or the main water valve. If you don’t already have isolation valves fitted it may be a good idea to install them at the same time to carry out future maintenance. After drilling, almost all taps will attach by simply pushing their base into the hole and screwing a washer onto the underside. Some taps are provided with rubber washers or spacers to ensure a tight fit on the worktop. Once the tap has been firmly affixed to the worktop, the hot and cold water feeds can be screwed into the base of the tap. If you haven’t already got them in place, it’s recommended to use flexible ‘easy fit’ hoses rather than having fixed copper piping. Remember to use PTFE or Teflon tape between any threaded connector joins to ensure a good, water-tight seal. For more detailed installation instructions, check the instructions provided by the manufacturer of the tap.

If you are buying your wooden worktops from Worktop Express®, we can pre-drill your worktops with holes of just the right size to suit whichever tap(s) you may have chosen. Prices start at just £7.50 per hole, and can be positioned as required to match your sink. For further details, visit our bespoke cutting service page. And finally… Looking for further inspiration? Visit one of our kitchen showrooms today, all of which exhibit many of the taps and sinks in our collection. One of our showroom managers can happily talk you through the range, as well as other taps available from us.

SEE MORE TAPS IN OUR RANGE:

Please note:This guide was originally posted on 21st January 2015 and has been updated to include additional information. The most recent update was on 19th January 2018.

Filed under: General by Worktop Express Admin on Wednesday, July 12th, 2017
No Comments »