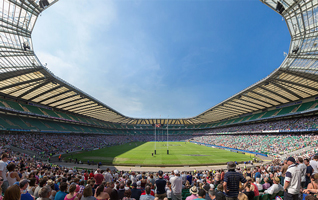 Situated on the River Thames in south-west London, Twickenham is a town that expanded rapidly in the early 20th century, and is now best-known as the home of England rugby. Twickenham Stadium is the largest rugby stadium in the world and can seat up to 82,000 spectators, and hosts live music concerts as well as charitable events throughout the year. The land for Twickenham Stadium was purchased in 1907 for the sum of £5,572; the area was formerly a plot for growing fresh produce, earning the stadium its nickname, 'The Cabbage Patch'. Interestingly, the pitch surface was raised using soil from the excavations made to accommodate the Metropolitan Tube Line, and after the stadium agreed to begin hosting music concerts in 2003, the Rolling Stones were the first band ever to perform there. Twickenham is also the site of Stoop Stadium, home ground to Harlequins FC, co-founders of the Rugby Football Union.

A town measuring 4.77 square miles, Twickenham is home to an impressive three historic mansions - York House, Marble Hill House and Strawberry Hill House - all of which are distinct and notable in their architectural styling, and open to the public for those with an interest in structural design or the history of the area. If live music is more your cup of tea, the Cabbage Patch pub on London Road holds regular events on Sunday nights, dating back as far as 1983.

If you live in Twickenham and would like to discover the incredible standard and high quality finish of our worktops, why not try our worktop sample service? With prices starting at just £5 per sample or sample pack, we will deliver straight to your door, free-of-charge. What's more, the cost of samples can be discounted when you place your order with us! So do get in touch; please telephone us on 0345 22 22 644, or email .

To see a wide range of our worktops in person, why not visit our Camden showroom in north-west London?

Order your worktops by 12 noon for next day delivery to Twickenham.