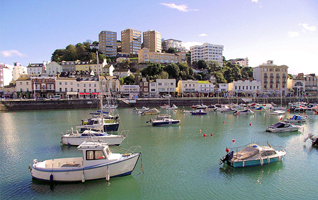 With an economy originally based in fishing and agriculture, the seaside town of Torquay in Devon has evolved into a fashionable resort. Historically, the town's popularity grew during the Napoleonic wars, as members of the Royal Navy docked their vessels in the harbour. As the resort became more greatly esteemed, it developed into a favoured destination for Victorian high society, and gained the nickname 'the English Riviera' thanks to its salubrious climate.

Crime novelist and playwright Dame Agatha Christie was born in Torquay, and spent much of her early life there. The 'Agatha Christie Mile' can be followed through the town, revealing a trail of plaques commemorating her life's work.

Torquay was also the fictional setting for comedy sketch show Fawlty Towers, voted 'the best British television series of all time' according to a list compiled by the British Film Institute in 2000. The plot centres on farcical situations at the seaside hotel - run by owner Basil Fawlty (portrayed by John Cleese) - as a wild selection of difficult and eccentric guests come and go.

Situated on the beautiful south-east coastline, Torquay is quite a distance from any of our showrooms. However, here at Worktop Express® we offer a handy worktop sample service and will gladly deliver samples straight to your door. Samples of any of our worktops are delivered free-of-charge, with costs starting at just £5. This is refundable against your worktop order on a one-for-one basis, making it an easy decision to discover first-hand the impressive quality of our worktop collection.

Order your worktops by 12 noon for next day delivery to Torquay.