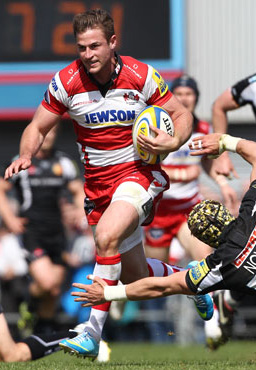 Okay, I know we said we weren’t going to do another rugby blog but… sometimes the rules are made to be broken!

Last week’s blog had already been published on the web when we learned that Worktop Express®-sponsored player, Henry Trinder, had been awarded the Aviva Premiership Try of the Week for Round 22.

The award-winning try was scored during the Exeter Chiefs match at Sandy Park on the 4th May. Trinder switched from defence to attack, setting off with the ball after a pass from James Scaysbrook, dodging Chiefs left right and centre in his mission toward the posts! Ducking and diving, Trinder escaped Luke Arscott’s clutches before a clever step off the left foot left winger Jack Nowell for dust and Trinder was free to score.

What an amazing try – even though the Cherry and Whites weren’t victorious in the end, Henry played a fantastic game and his award was certainly well earned. Well done Henry!