A glorious sunny Bank Holiday marked the start of the Autograss season for our sponsored driver, Stuart Deacon. His Worktop Express® branded car has been tearing up grass in cars representing our kitchen workbenches for a few seasons now, but this year we plan on following his success a little more closely. The first round of the UK Autograss Championship was held locally to our offices in Gloucester, so we went down and caught Stuart on camera, along with some footage of this exhilarating motorsport. So get ready, and strap yourself in to experience the thrill of throwing a ridiculously light car – with plenty of power – around a grass circuit. 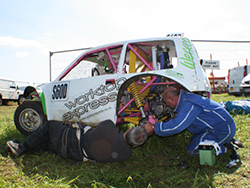 As you can see there was some thrilling sideways action from Stuart and his pocket rocket. The first heat saw Stuart fly off the line and take an early 2nd place, which he gallantly held for the next few laps until unfortunately his rear left CV joint broke (the piece which allows the axel to move around with the bumps in the road). This saw Stuart drop from 2nd to 6th on the last lap – a frustrating start to the weekend.

After some temporary pit-stop mechanics, Stuart managed to get the car going again and had an exciting second heat on Saturday afternoon which saw him fighting for 1st position all the way to the end. He was pipped to the post by merely a couple of feet, giving him a 2nd place. 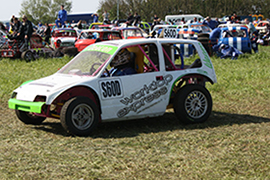 The third and final heat took place on Sunday morning and Stuart again set off to a flying start, making it in to the first corner in pole position. After a couple of absolutely hair-raising laps Stuart’s car again succumbed to a CV joint failure, meaning he had to limp the car home for another 6th place. If not let down by mechanical failure, Stuart would have been top qualifier for the weekend – unfortunately that’s the way racing goes, but he’s very upbeat about the car’s performance and is ready for next weekend’s racing in Evesham.

Stuart’s determination, resilience and skill echoes that of our fabrication team, who’ve produced some beautiful bespoke worktops over the last few weeks. Fortunately there’s not quite the same level of complications to deal with, but our multi-point quality control always ensures that any issues are picked up before the worktops are finished.

Worktop Express® sponsors a number of local sporting heroes alongside Stuart, and we enjoy keeping you regularly updated on their progress – so look out for more on the blog very soon!